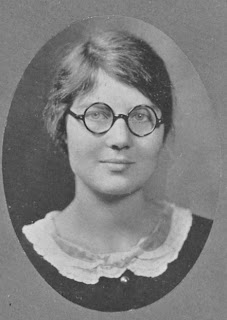 Elisabeth Alden Scott was the oldest of three sisters who were raised in China as the children of foreign missionaries and attended Wilson College. After graduating from Wilson in 1928, Betty completed a course of study at the Moody Bible Institute in Chicago. She married John Cornelius Stam on October 25, 1933.

The Stams were stationed at the China Inland Mission in Yangchow, Kiangsu, China. Betty wrote of their assignment:
"If the Lord wants me to be one of the two hundred (new missionaries of the C.I.M.) nothing can touch me beyond His will. It doesn't matter what happens in China. If God wants those people to be given the last change before He comes, what does it matter if one or two hundred missionaries are captured by the Bandits, or succumb to famine, or sickness, or are in any way endangered, provided only they do what they are meant of God to do." (The Story of John and Betty Stam, E.H. Hamilton. March, 1936)

The Wilson Billboard, December 15, 1934:
"BANDITS SEIZE WILSON GRADUATE IN INTERIOR CHINA"
"Word has come through the Associated Press in the last week of the seizure by communistic bandits of the Rev. and Mrs. J.C. Stam and their ten week old baby in southern Anhui province in China. By Thursday night, a report from the China Inland Mission revealed that the bodies of Mr. and Mrs. Stam had been found. No other details were given. Mrs. Stam was Elisabeth Scott, '28, and a sister of Mrs. Gordon Mahy (Helen Scott, '30), and of Mrs. Theodore Dwight Stevenson (Beatrice Scott, '33); the latter was married early in September and sailed with her husband on the staff of the Hackett Medical College in Canton. Mrs. Stam's parents are Dr. and Mrs. Charles E. Scott, Presbyterian missionaries at Tsinan, Shantung.

"Immediately after the China Inland Mission was advised of the seizure, the superintendent of the mission for Anhui province left for Nanking to help the American consulate release Mr. and Mrs. Stam. The foreign office wired the governor of Anhui province urging him to undertake a rescue expedition.

"The Stams, who spent the summer in Anhui because of disorder in their own district, had but recently returned to their station in the town of Tsingteh. This has just been raided by Reds, presumably a portion of those defeated in Kiangsi province and scattered."

"The story as finally disclosed in the papers of the tragic event which has cost the lives of Betty Scott '28, and her devoted husband, John Stam, at the hands of Communist bandits in China, has made an impression on the College community that will not soon be forgotten. It is safe to say that nothing from the mission field in recent years has so poignantly brought home what Christian consecration and Christlike heroism can mean.

"By reason of the many close friendships of the present student body with Beatrice Scott '33, and among the more recent graduates of the College with Helen Scott '30, both undergraduates and alumnae, as well as the many members of the faculty who knew Betty here so intimately, will long continue to share with Dr. and Mrs. Scott, and with the members of their family, the intense grief and profound sense of loss which this tragedy has entailed, a sorrow mitigated only by the joy of knowing that their infant grand-daughter survived.

"Faced in its stark reality what has actually happened  seems scarcely possible of realization. it seems only yesterday that Betty herself was here, in the classroom, as a Student Volunteer, at her post in the Cabinet, and in her literary society; with her gentle and gracious presence exerting that quiet and pervasive influence for which she will always be remembered by those who knew her. To recall Elisabeth Scott to her own classmates is needless. To recall her to those who shared with her any one of the four happy years of her college life is to recall a presence so radiant of sincerity and of inward beauty that its memory can never be lost.

"Perhaps what most alumnae will recall, aside from the gentleness of her demeanor, the fragrance of her loving affection and the grace of her literary expression, is the serenity and faith with which she lived among us; a serenity born of the deep peace of her own soul, and a faith that was founded upon a Rock. Values like this have not perished. Faith demands the acknowledgement that they have but moved on to higher and ampler fields of service. What Dr. Robert E. Speer wrote some twenty-five years ago of William Borden of Yale, "It seems impossible that all this strength and devotion can have been taken away from the work of the Church here below. Evidently there are missionary undertakings of even greater importance elsewhere." must be said of Elisabeth Scott and of John Stam." 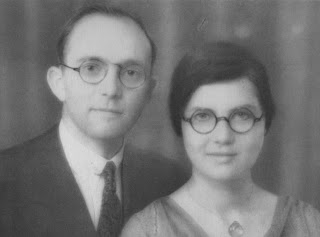 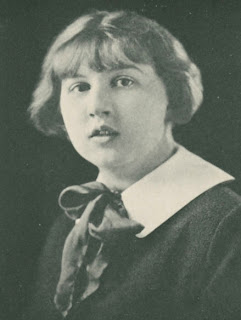 Frances Fulton was a teacher at Hwa Nan College in Foochow, China during the 1930s.

AQ May 1947: "Frances Fulton has gone to China to teach in Hwa Nan College, Foochow. Fukien Province. She expects to be there for at least five years. She took her cello with her and hopes to continue her enjoyment of it in China."

Frances Fulton wrote a Christmas letter from China, having returned on the third trip of the Marine Lynx with some hundreds of others in crowded hatches. Frances had been away from China eight years, and her first impression was one of the sameness of China. On closer examination, however, she found that there were many changes. The educated group and the once moderately comfortable middle class are shabby. The college’s greatest need is buildings. The largest buildings are in ruins and they have more than twice the enrollment of pre-war days.

Frances wrote from Peiping where she has been studying Mandarin which she thinks must be the hardest language on earth. However, she is glad for the opportunity and hopes to put it to good use when she returns to Foochow.

AQ February 1948: "Frances says that in spite of what our newspapers print about China, there is much that is constructive going on. The people are going about their daily work, the schools are overflowing, the churches have full programs and full houses, and life in general seems to be going on in a normal way. She believes China will make interesting history in the next few years."

AQ November 1949: "A long letter reached us from Frances Fulton from Hwa Nan College at Foochow, Fukien, China, where she is one of the music faculty. At the time of writing in May, the situation in China was tense, but college was to continue on normal schedule, come what may. She said that communications might become difficult, but to continue writing to her because it meant so much."

AQ Spring 1950 p. 7 “D.P. in China” Frances discusses the circumstances in which she found herself as a "displaced person" after leaving Foochow and finding that she was allowed to return. (Click link to read letter.)

AQ November 1951: "Frances Fulton’s plans include the study of Korean at Yale, then off to Korea, perhaps."

AQ November 1952: "Frances Fulton sailed September 26 for Japan. Her eventual destination is Ewha Womens University, now in Pusan; but until she is permitted to enter Korea she will be at the Seiwa Training School, near Kobe Japan."

AQ February 1953: "Frances Fulton describes Ewha Unversity and the difficulties of teaching and living there. “The pianos! Ewha had 60 in the prewar days. Now it is down to seven and none of those have all the hammers and strings. The practice rooms are board sheds about 9x12 with dirt floors and canvas roofs. The pianos are up on board platforms to keep them from sinking into the mud, so the chairs must be propped up too. Each lesson becomes a balancing act…That Ewha has been able to keep going at all, and has 1300 students in its various colleges is nothing short of amazing…I have covered the floor of my room with heavy paper pasted down at the edges, and with matting so the wind no longer whistles up between the boards and blows out the oil stove. We can buy the root vegetables, spinach, Chinese cabbage, carrots, apples, pears, persimmons and some beef and excellent fish on the local market." 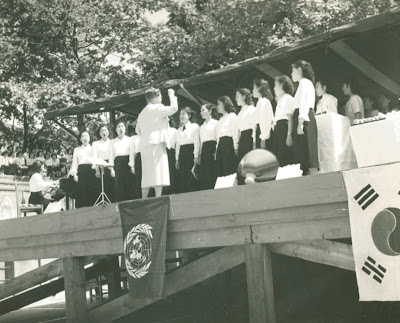